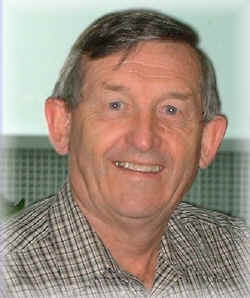 Rodney W. Francis founded "The Gospel Faith Messenger" Ministry in April, 1964. He has produced a wide range of Holy Spirit anointed Christian material over the years.

This material has helped thousands of people around the world to “Grow in the Word of God” and is now available in the form of Booklets, Books, Manuals, CD's, DVD's, Tracts, Bible Correspondence Courses (free), and E-Mail Ministry. The books and manuals are available for sale and all proceeds go back into “The Gospel Faith Messenger” Ministry.

Born 17th January, 1942, at Palmerston North, New Zealand. Brought up on a farm milking cows, raising sheep, pigs and turkeys. Dropped out of school at 15 "to work on my father's farm because there was nothing else for me to do."

At 17 years of age (1959) I was saved in an Independent Pentecostal Church (known at that time as "The Open Door Mission" in Palmerston North), after being brought up a very nominal Presbyterian. After a short time I backslid for a period of 4-6 months (the most miserable time of my life!). Then, at 18 years of age (1960), God spoke to me (when still backslidden) and called me to serve Him. It happened the same day that the preacher I was saved under (Mr. Albert Hague) died. I clearly heard these words impressed into my spirit: "Somebody has to take his place." In a moment of time I knew that "somebody" was me! The power of that word turned me back to God. I got baptized in water by full immersion, and then sought the Baptism of the Holy Spirit. The fear of man, plus other inferiorities and insecurities, hindered me from receiving the Baptism of the Holy Spirit in the presence of other Christians. A month or two later I was sovereignly filled with the Holy Spirit at 5:30 a.m. one morning while rounding up the cows for milking. I began speaking with other tongues as fluently and clearly as though I had been speaking them all my life. That morning God spoke to me the second time and told me "He was raising me up to be a minister of the Gospel, and that His sign to me was that He would open doors for me to preach right away." That is what happened, and I have been preaching ever since.

I remained loyal to the little Pentecostal Church I was saved in, and eventually became its Pastor from 1974-1991, spending a total of 31 years there. It was during my time of being Senior Pastor that I was able to bring the church into an "Association," then a full "Affiliation" to the "Elim Churches of New Zealand, Inc." (We were in Association from 1979 to 1985, and became Affiliated in 1986). Unfortunately (a few years after Jean and I had moved to Hamilton, NZ) the church lost its way and was closed down at the end of 2005.

In 1987 I was elected on to the National Executive Board of the Elim Churches of New Zealand, Inc., a position I held until October, 1997. I voluntarily resigned so as to give more time to minister to the Body of Christ world-wide.

In April, 1964, I founded "The Gospel Faith Messenger" Ministry, which is mainly a literature ministry providing salvation, healing and follow-up materials to help people find Christ and get established in the Christian faith. "The GFM" has three Bible Correspondence Courses in circulation (available in both the "Authorized King James Version" (KJV) and the "New International Version" (NIV) of the Bible):

These require answers to be filled-in from the Bible, the Lessons to be sent in to a GFM Office, which are then marked and returned with a personal letter of reply. Thousands have gone through these Courses over the years, and currently several thousand students are on our files, including many prison inmates in a number of countries. Certificates of Completion are given on completion of each Course.

We have a range of 15 different Salvation/Healing/challenging Christians type of Gospel Tracts. I have authored 39 different booklets, books and teaching manuals.

"The GFM" Ministry presently has Offices in operation ~ Paraparaumu, Hamilton (New Zealand), Nairobi (Kenya) and Port Vila (Vanuatu), giving Christians voluntary involvement in ministering to people world-wide through anointed Gospel literature and letter writing. This Ministry has gone into over 220 nations and still continues today, reaching out to the multitudes in many parts of the world.

From 1974-1979 I was the Managing Editor of "The Evidence" magazine, the official publication of "World Outreach" Missionary organization, founded by Dr. Len J. Jones and the magazine is now called "nations"). Len was a New Zealander with a big vision.

On 31st December, 1999, Jean and I officially resigned from both the Hamilton City Elim Church and the Elim Churches of New Zealand, to go full-time with "The GFM" Ministry (with no financial support guaranteed, as we believe God told us not to raise a financial support base and He would show us what he could do for us. He sure has!). That was a faith step and one that has proven to be the right decision. The GFM Ministry instantly stepped into a new season in God and has kept growing ever since. We are believing God for even greater days ahead for this multi-faceted Ministry.

My ministry strengths are in the area of encouragement, imparting Gifts of the Holy Spirit, the Prophetic Ministry, inspiring others to know who they are in Jesus Christ, and to fulfil their destiny through knowing who they are in God, and Who God is in them. "Equipping for Leadership into the Nations through the Power of the Holy Spirit" is our Ministry motto and is very much a part of my message today, challenging Christians to become competent and confident in their ability to lead others from where they are at, e.g. to either saving faith in Christ, or to help mature them, and so reproduce themselves in others to the glory of God.

My "School Of The Holy Spirit" manual (which developed out of the School in Swansea, Wales in 1997) is being increasingly used in small groups within Christian circles around the world. Many thousands have been printed and distributed throughout East and Central African nations. The developing of Prophetic Teams is something very much on our hearts.

I have also conducted Seminars on:

I married Jean Hunt (born 16th December, 1940) on 22nd September, 1962. She was a daughter of the previous Pastor (Clarence Hunt) in the church in Palmerston North. We have served the Lord together all our married life and have one son, Mark who lives and works in Paraparaumu, NZ, with his wife, Tania, and daughter, Annahlise and son, Brayden. (Mark runs his own computer business called Paradigm PC's). They are currently on an exciting journey with God!

I left farming on my wedding day and joined the New Zealand Post Office as a postman, where I worked from 1962 to 1974 until stepping into full-time ministry. Jean is totally supportive of me in the ministry and releases me to fulfil the call of God.

We continue to actively enjoy the ministry, training leaders and seeing many lives enriched by the Word of God. We have a number of "Timothy's" in full-time ministry today. I really enjoy running "Timothy" classes (also called an "Equipping Station") with potential leaders, based upon relationship, being open and honest, character building, "nitty-gritty" discussion times, discovering, developing and releasing the will of God in our lives. Comments we have had from these are that they are the most beneficial times of any church meetings people have ever been in!!

It has been my privilege to minister in many different churches, a number of Bible Schools, Colleges and Institutes in different parts of the world, the most notable being "Christ For The Nations" (Dallas, Texas, USA) (the largest Pentecostal Bible College in USA) where I have ministered on two occasions (1995 and 1998) (four days each time).

Rodney ministers through the mail and E-mail to numbers of leaders in many nations, giving them encouragement through personal letters, tracts, Bible Studies, CD and DVD messages and books. Many of them tell me I am the only person encouraging and helping them in their ministries.

In the year 2000 Rodney launched "The GFM" Prayer Support Letter, encouraging people to pray for this Ministry. It is sent out to more than 120 nations (mainly via E-Mail) ~ this Ministry feels the power of that prayer support.

In the year 2001 Rodney launched the "Barnabas Bulletin," a monthly encouragement letter for Christian workers and Christians generally. From nothing it has risen to touch thousands in more than 120 nations of the earth (mainly via E-Mail)!

In the year 2003 Rodney launched a new E-Mail faith/teaching ministry called "Faith Messages." To date the responses to these have been very encouraging.

In November 2007, Jean and I moved to Paraparaumu on the Kapiti Coast in New Zealand. From here we continue to minister to thousands of people world-wide, as well as to hungry hearts in this region who are eager to know more of the power of the Prophetic Ministry and the operation of Spiritual Gifts (1 Corinthians 12:1-11).

From this CV you will see that we are a ministry couple whose hearts and vision extends to the "uttermost parts of the earth" (Acts 1:8).

"The Gospel Faith Messenger" Ministry.  PO Box 57, Paraparaumu 5254, New Zealand.  Email This email address is being protected from spambots. You need JavaScript enabled to view it.

A CALL TO SALVATION

Have you ever been challenged to commit your life to Jesus Christ?

The Bible calls this salvation. It has been said